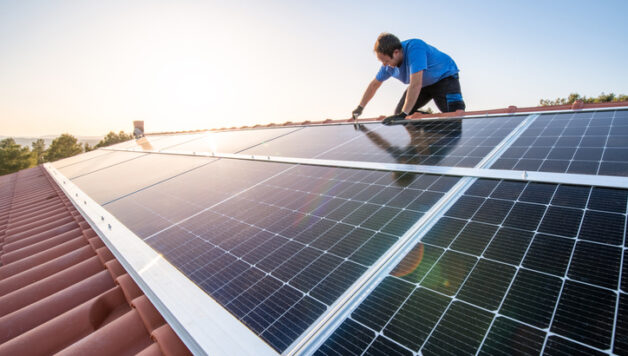 How Do Solar Panels Work?

A solar panel is a device that transforms sunlight into electricity. This panel type converts light from the sun or other sources into electricity. Solar panels typically have a large surface area, so they can absorb light and are usually dark in colour to better capture the light from the sun and can be purchased and installed by solar companies. Solar panels turn photons from sunlight or other sources into an electrical current, which can then be used to power an appliance or device.

How Do Solar Panels Work?

Solar panels have been around for over 40 years, but their popularity has skyrocketed recently. There are many reasons for this, and all revolve around saving money on your electric bill. If you’re in the market for solar panels, here’s what you need to know about how they work.

First, solar panels convert sunlight into electricity using a process called photovoltaic conversion. This converts photons from the sun into electrons that can be used as energy to power your home or even function as storage devices. A panel’s two major components are photovoltaic cells and an ‘antenna’ (known as a PV panel).

The essential components of a photovoltaic piece are called ‘photovoltaic cells.’ Photovoltaic cells, made from silicon, are sandwiched between two sheets of glass. The first layer is thin and acts as insulation. The second layer forms the fundamental photovoltaic element. The first layer contains a small amount of separation space between each cell, while the second layer plays a role in providing electrical contact to each cell. This structure is then covered by another thin sheet of glass that protects them from environmental damage during their life span and acts as an electrical connection to the rest of your solar panel.

As the sun hits your solar panels, it absorbs some of the light and some bounces off. The photons that get absorbed pass through the first layer, interacting with the silicon to cause an electric charge. This process is known as photovoltaic conversion. It occurs because photons carry momentum, which causes an electron in a semiconductor like silicon to ‘jump’ from its resting state to a higher energy level. Once this happens and the electron falls back into line with its original energy state, energy is released as a byproduct. This energy then moves through conductive metal strips (usually copper) and into the electrical grid that powers your home.

What happens when the sun goes down?

That’s where storage comes in. If you didn’t have a way to store solar energy, your solar system would be pretty useless at night. That wouldn’t be much fun at all, now would it? Luckily, this is where batteries come in. The energy converted from sunlight can be stored in battery packs and used throughout the night to power your home through the evening hours. This means you’ll never have to worry about flipping a switch and being left in the dark because there isn’t enough sun available to power your electronics and standard appliances.

One of the most significant advantages of solar panels is that they can help lower your electric bill. With an average national electricity rate in the United States of about 10 cents per kWh, it can add up quickly when you’re using more power than you usually would. Lowering your usage will also drastically improve your carbon footprint by reducing the fossil fuels burned to provide electricity. (Although fossil fuels are necessary for producing solar panels, they have more harmful greenhouse gases than electricity produced by solar panels. Using fossil fuels to produce electricity is, therefore, an unnecessarily negative impact on the environment.)

The future of solar panels

Even though solar panels are becoming increasingly popular, their use is still somewhat limited. With the recent changes in energy policy in many parts of the world, there is a lot of potential for a global energy revolution. This will see an increase in solar companies being created across the globe as demand increases and new technology is available to convert sunlight into electricity.

If you’re looking to change how you produce and use electricity at home, solar panels are a great place to start. Because they can save you money over the long run and help reduce your carbon footprint, they make an excellent choice.