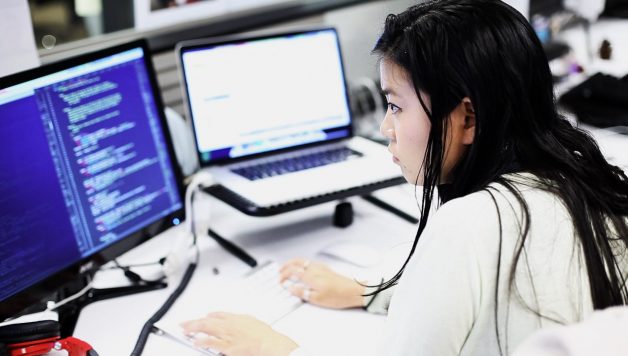 What Does A Computer Programmer Do? Let’s Find Out

A computer programmer is responsible for coming up with the piece of code that shall translate the computer program that has been designed by the software developer into a set of instructions which a computer can follow. It is also part of their task to develop a graphical user interface that allows laypersons who have no knowledge of computers to operate the program even when they are not aware of the technical language used in its design. A majority of computer users rely on the user-friendly computer programs that guide them on what to do via some easily understandable menus. A computer programmer plays a critical role in making sure that the graphical user interface has been designed with the end-user being taken into consideration.

When a computer programmer is requested to work on a particular project, his first order of business is to conduct consultations with the parties who will be using the product. He/she must conduct interviews with employees and executives and ask questions regarding the manner in which the software will be used and what it is meant to achieve. It is important for any computer programmer to understand this stage properly so that he can design his program correctly.

The planning stage comes after consultation stage. A computer programmer creates a flowchart which provides a layout of the result when a user inputs a specific command. The programmer shall also incorporate into his design all the emergency procedures that should be taken should the program fail or any other circumstance that forces it not to function as it should.

The stage that follows after this is writing the actual code. With the aid of programming languages like Java, Visual Basic, and many others, the programmer makes a computer code in adherence with the flow chart designed in the previous stage. A majority of small-scale projects can be done by a single programmer but for large projects, many programmers will need to work together. This is considered to be the lengthiest stage of the entire programming process.

Unfortunately, the work of a computer programmer does not end when the code writing process is over. The programmer will need to review his work to get rid of any bugs that could be in the system. The review is often done in two stages. The first step involves spending lots of time testing and debugging a program so as to address all problems. To achieve this, the programmer or programmers will subject the program to some rigorous testing procedures so that it fails. Based on their findings, they can design solutions which will anticipate such potential problems. The second phase of testing is referred to as beta-testing. In this stage, the program is usually rolled out to a few users, for instance specific employees of a specific company. The objective of this testing phase is to identify any problems with the program when it is in actual use. In case of any bugs or errors in this testing stage, the programmer must first fix them prior to releasing the program for mass usage.

After programmers are sure that a program is going to work as intended, they will make an official release to the public but their work will not end there. They will continue monitoring the program for any issues and work towards refining and fix them. The programmers will also make upgrades and improvements to ascertain better program performance. Since the product is a programmer’s brainchild, the programmer should ensure that in future upgrades, there are new features to make the program more user-friendly or better optimized for mobile. If need be, a programmer could also develop technical drawings that would aid in efforts that are aimed at supporting and documenting coding.

What Projects Does a Computer Programmer Handle?

In the corporate environment, programmers will often make up a small section of a large team that is hired to produce applications with thousands of lines of code. In this case, the programmers receive instructions from different software engineers in form of a Unified Modeling Language chart, which serves as an illustration of all the working sections of the application. Such an application will, in most cases, be written in C++, a programming language that most programmers learn on campus. And since the programmer will have fewer responsibilities that the engineer who is designing the software, he will obviously earn less money. However, a programmer can work in various settings apart from the corporate environment.

How Do You Become a Computer Programmer?

The chances of you earning a job as a computer programmer would be higher if you earned a bachelor’s degree in computer science, information systems, or mathematics. Some employers, however, will hire you even with a degree in a different subject like business, finance, and accounting, provided you have taken some computer science classes. And because the experience is just as valuable as a degree in computer science, you should try and do internships while still in school. And once you have moved to work in the field, you must be sure to keep all your skills up-to-date by seeking to learn new programming languages. Certification in different programming languages could also be invaluable.

Is This Occupation Fit for You?

Your personality, work-related values, and interests are a few of the factors that will determine if being a computer programmer is appropriate for you.