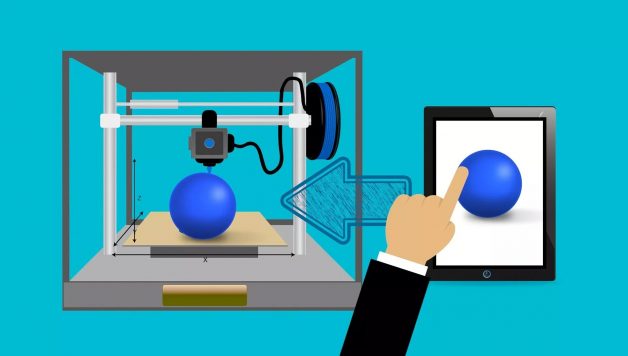 We are still a long way from being having mini-replicators that can produce a cup of Earl Grey tea on demand, but  three-dimensional (3D)  printing technology is becoming more common for industrial, medical, and home use. Once limited to producing plastic copies of small objects, 3D printers can now produce objects made of just about any material, and in any size.

A 3D printer works much like a traditional printer. When a document is printed, ink is deposited on paper. By depositing more and more layers of ink, it is theoretically possible to produce a 3D document. These printers work by depositing multiple layers of various materials on top of one another. This technique is known as additive manufacturing. In traditional manufacturing, objects are often created by carving or drilling materials to form the desired shape, also known as subtractive manufacturing.

A template is created by scanning an existing object, or by creating a computer model of the object to be printed. As the printer creates the object, layer by layer, it receives information about where to deposit material and where to leave open spaces.

There is no limit to the uses for 3D printing technology. Research is being done for medical uses, including printing of custom-fitted prosthetics, and even organs for transplant.

In the manufacturing field, 3D printing is not yet used for mass production. For the production of multi-use springs, for example, traditional manufacturing techniques are still more cost effective and faster.  However, 3D printing is well suited for producing prototypes. A potential new product can go from design to reality right away, without the expense and time involved in retooling existing machines.

In the automotive industry, 3D printing can be used to produce parts for older vehicles that are no longer in production and to customize new vehicles for limited runs, or even for single buyers.  Bentley Motors uses 3D printers to create prototypes of new production models, starting with miniature models, moving up to one-third scale, and even full-sized models of some parts.

Manufacturers who produce custom, as well as stock parts, can also benefit from 3D printing technology. For companies like Brooklyn, NY’s Lee Spring, parts specifically fitted for one application can be produced, and the design can then be saved if a customer has need of the same or a similar custom part in the future.

Finally, for the science fiction fans looking for a food replicator, 3D food printers actually exist! They do not produce food out of the molecules in the air, but they are able to create edible creations from pre-programmed recipes, using fresh ingredients loaded by the user. An ambitious entrepreneur in London has plans for a restaurant in which everything, from the tables to the entrees, is produced by 3D printers. Bon appétit!